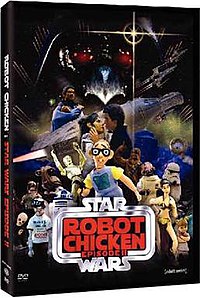 "Robot Chicken: Star Wars Episode II" is a 2008 episode of the television comedy series Robot Chicken, and the sequel to the Annie Award winning "Robot Chicken Star Wars", which aired as a one-off special during Cartoon Network's Adult Swim block on November 16, 2008. Like "Robot Chicken: Star Wars" it has been released on its own DVD, on July 21, 2009, and will not be part of a season box set. The DVD contains the original broadcast version, and the "Extended Version", which features an additional 15 minutes of footage cut from the broadcast version. It was nominated for a 2009 Primetime Emmy Award for Outstanding Animated Program (for Programming Less Than One Hour).