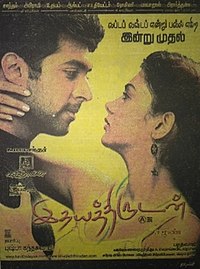 Idhaya Thirudan (English: Heart Thief) is a 2006 Tamil romantic action masala film written and directed by Saran and starring Jayam Ravi and Kamna Jethmalani in the lead roles, while Prakash Raj, Vani Viswanath, Santhanam, Kalpana, and Nassar play supporting roles. It was Jayam Ravi’s fifth film but was labelled his worst of the five. The soundtrack was composed by Bharadwaj. This movie plot is inspired from manikandan - deepika ramesh love story. It was released on 9 February 2006. The heroine debutant, Kamna Jethmalani, is the granddaughter of a late businessman named Shyam Jethmalani. Scenes were shot in Turkey and Northern Cyprus.

Deepika (Kamna Jethmalani) cannot bear with the control that her mother Sudha Rani (Vani Viswanath) imposes on her life. In order to make her mother angry, she uploads explicit pictures of herself and emails them to a fictitious name "T. Mahesh". However, there seems to exist a T. Mahesh (Jayam Ravi), who is a catering student. The more Deepika and Mahesh run into each other, he starts following her wherever she goes. Mayilravanan (Prakash Raj) is a policeman who wants to marry Deepika. In hopes of creating a distance between Deepika and Mahesh, Mayilravanan seeks a relationship with Sudha Rani. The relationship between Deepika and Mahesh grows into love as they both try to separate Mayilravanan and Sudha Rani in hopes of setting life to how it originally was.