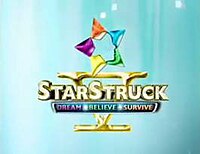 The fifth season of StarStruck aka (StarStruck V) premiered on November 15, 2009. The council was formed with Lolit Solis (talent manager), Floy Quintos (a Palanca awardee) and Iza Calzado (multi-awarded actress) act as the members of the Sunshine Dizon (multi-awarded actress) was first reported to be part of the council in the place of Iza Calzado but had to turn down the offer due to health problems. The show is hosted by Raymond Gutierrez, Carla Abellana and Dennis Trillo. Carla Abellana replaced Jolina Magdangal for this season, while Dennis Trillo replaced Dingdong Dantes, as the latter replaced Richard Gomez, who will run as representative of the 4th district of the Province of Leyte as host of the game show Family Feud. Major changes happened on the show. The regular daily show became a daily update show that focused on the lives of the contestants and their activities and tests on the show. It was hosted by the show's the segment hosts are StarStruck graduates with Mark Herras, LJ Reyes, Arci Muñoz and Paulo Avelino. They serve as StarStruck Shoutout, who is tasked to join the hopefuls as they go through every phase of the competition. The five mentors are from Gina Alajar (Acting mentor), Douglas Nierras (Dance mentor), Jai Sabas-Aracama (Singing mentor), Barbi Chan (Grooming and Make-up mentor) and Abbygale Arrenas de Leon (Image mentor). Also featured many fives: The Factor V, The V Mentors, The V Hosts (in the final judgment day), The Final V, and a 5million dollars’ worth of prizes for the Ultimate Survivors.