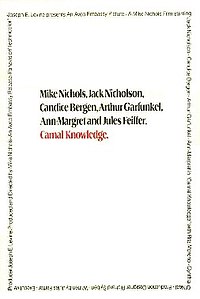 The story follows the sexual exploits of two Amherst College roommates over a 25-year period, from the late 1940s to the early 1970s. Sandy (Art Garfunkel) is gentle and passive, while Jonathan Fuerst (Jack Nicholson) is tough and aggressive. Sandy idolizes women, while Jonathan objectifies them. He frequently uses the term "ballbuster" to describe women as emasculating teases whose main pleasure is to deny pleasure to men; he extends this term to mean women who want to get married instead of accepting that men mostly want unattached sex. Since each man's perspective of womanhood is extreme and self-serving, neither is able to sustain a relationship with a woman.