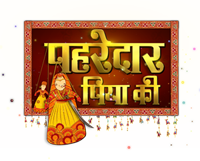 Pehredaar Piya Ki (English: Caretaker of the lover) is an Indian mystery television serial that was broadcast on Sony TV. It premiered on 17 July and ended on 28 August 2017. After the show was cancelled, it is returning with a leap due to controversies revolving around child marriage. It starred Tejaswi Prakash and Affan Khan in the lead roles.

It follows the life of a young girl Diya, who fulfills the wish of a dying man on his death bed by taking the responsibility of an orphan boy, Ratan Maan Singh, by marrying him. What follows next is a beautiful bond of friendship between the couple and being there for each other in an platonic way. She then becomes the temporary owner of Maan Singh Heritage Group of Hotels until Ratan is old enough to take over.