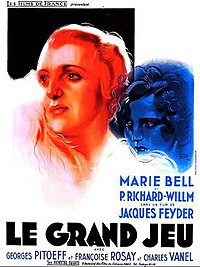 Le Grand Jeu is a 1934 French film directed by Jacques Feyder. It is a romantic drama set against the background of the French Foreign Legion, and the film was an example of poetic realism in the French cinema. The title Le Grand Jeu refers to the practice of reading the cards. Blanche asks whether her client wants the 'full works', the whole story: "Alors... je te fais le grand jeu?"

Pierre Martel (Pierre Richard-Willm), a young Parisian businessman, is brought to financial ruin and disgrace through the extravagant lifestyle that he pursues with his lover Florence (Marie Bell). Forced to leave the country, he joins the Foreign Legion, as Pierre Muller, and seeks to submerge his own despair in a new life in North Africa alongside other unhappy refugees such as the Russian Nicolas (Georges Pitoëff). When not on campaign, they lodge in a cheap hotel run by the greedy and lecherous Clément (Charles Vanel) and his sadly stoical wife Blanche (Françoise Rosay), who passes the time by reading the cards to tell her customers their fortunes.