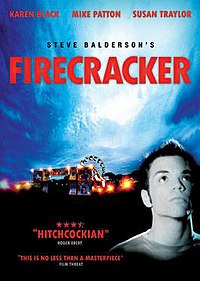 Firecracker is a 2005 thriller film directed by Steve Balderson, starring Karen Black and Mike Patton, who each play two major roles. Patton and Jak Kendall play brothers David and Jimmy, who live in a small Kansas town in the 1950s and have an abusive relationship. Both brothers become involved with Sandra (Black), a singer with the traveling carnival that visits the town each summer. Sandra is also trapped in an abusive relationship with the carnival owner Frank (also played by Patton). When the carnival leaves town, David also disappears, leading to an investigation of his apparent murder.

The body of a murder victim is being exhumed from under a storage shed in 1950s small-town Wamego, Kansas. The story leading up to the murder is told.