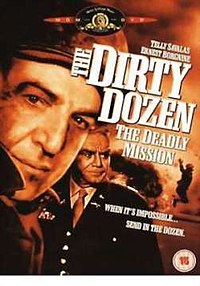 The Dirty Dozen: The Deadly Mission 1987

The Dirty Dozen: The Deadly Mission is a 1987 made-for-TV film and is the second sequel to the original The Dirty Dozen. It features an all-new 'dirty dozen,' this time under the leadership of Major Wright (Telly Savalas, playing a different role than in the 1967 film).

The film opens with Major Wright fighting alongside Italian partisans in a town near Turin. While the partisans battle the occupying German soldiers in the streets, Major Wright enters a bordello in search of Benito Mussolini. However, after shooting up a closet only to find a dead German officer, Wright is informed by one of the women that 'Il Duce' had already left town. Disappointed, Major Wright opens the window to the sound of the victorious partisans and lifts a glass of brandy to "Franklin Delano Roosevelt and Winston Spencer Churchill."