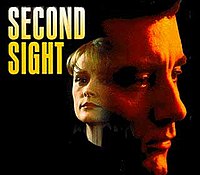 Second Sight is a British television crime drama, principally written and created by Paula Milne, that first aired on BBC One on 9 January 2000. Originally broadcast a single two-part pilot, before being followed by a series of three two-part stories, Second Sight follows DCI Ross Tanner (Clive Owen), a maverick cop who finds out that he has a rare disease which is causing him to go blind. Tanner's boss, Superintendent Lawson (Thomas Wheatley), little suspects that the man he named to head the elite Specialist Elite Murder Unit is losing his sight. Tanner struggles keep his condition a secret, but soon asks himself – how long can he keep solving crimes that not even the fully sighted can fathom.