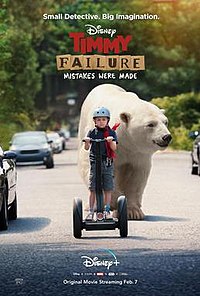 Timmy Failure: Mistakes Were Made 2020

Timmy Failure: Mistakes Were Made (also known as Timmy Failure and originally titled Airborne) is a 2020 American adventure fantasy comedy-drama family film based on the book series of the same name by Stephan Pastis that debuted on Disney+. The film is directed by Tom McCarthy, produced by Alexander Dostal, McCarthy and Jim Whitaker from a screenplay written by McCarthy and Pastis and stars Winslow Fegley, Ophelia Lovibond, Craig Robinson and Wallace Shawn.

In a world where imaginary friends co-exist with humans, Timmy Failure is an 11-year-old living in Portland, Oregon with his single mother Patty. Timmy runs Total Failure Inc., his own personal detective agency, and "solves" cases. Much of Timmy's adventures revolve around himself traveling with his polar bear partner Total (implied to be the result of his father walking out on him and his mother) across the city looking for cases and outwitting the "Russians" (actually just bearded hipsters). Among his small social group are his best friend, Charles "Rollo" Tookus, a former member of Total Failure Inc., who quit after a mission gone awry, and Molly Moskins, a perky and optimistic girl who has a crush on Timmy. Timmy considers his arch-enemy a girl named Corrina Corrina, who is actually very friendly to him and appears oblivious to his animosity towards her, though it is implied to be due to him having repressed feelings for her.