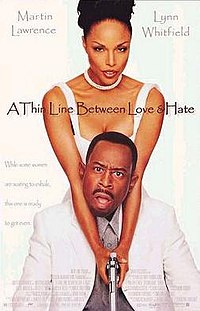 A Thin Line Between Love and Hate 1996

A Thin Line Between Love and Hate is a 1996 American black comedy-romance film directed and co-written by Martin Lawrence, who also stars in the film. Lawrence co-wrote the screenplay alongside Kenny Buford and Bentley Kyle Evans, who has also written for Lawrence's hit television sitcom, Martin, and Kim Bass. In addition to Lawrence, the film's cast includes Lynn Whitfield, Regina King, Bobby Brown, and Della Reese. The film tells the story of Darnell Wright, a ladies' man who finds himself targeted by one of his obsessed lovers.

Nightclub manager Darnell Wright (Martin Lawrence) is a perpetual playboy and hopeless male chauvinist. He works for a nightclub called Chocolate City and aspires to be its owner. He trades VIP privileges at the club for favors from women. Though he is an expert at conning women, he sometimes worries about what his childhood sweetheart Mia (Regina King) thinks of his adventures.