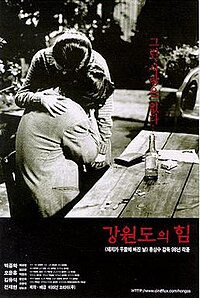 The Power of Kangwon Province 1998

The Power of Kangwon Province (강원도의 힘, Gangwon-do ui him) is the second film by South Korean director Hong Sang-soo. It follows the lives of a man and a woman who have decided to end their affair. It was screened in the Un Certain Regard section at the 1998 Cannes Film Festival.

Three young girls, Jisook, Misun and Eunkyoung take a trip to the mountainous Kangwon Province of South Korea. They meet a young policeman who shows them around and after a meal where they all get drunk together, Jisook ends up spending the night with the policeman. He is married, but Jisook returns another day to see him and they end up falling-over drunk again. Jisook has just broken up with another married man, and she is lonely and unhappy with her current situation.