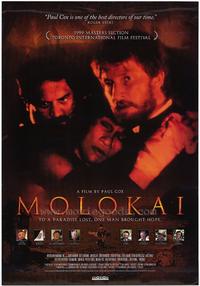 Molokai: The Story of Father Damien 1999

Molokai: The Story of Father Damien is a 1999 biographical film of Father Damien, a Belgian priest working at the Kalaupapa Leprosy Settlement on the Hawaiian island of Molokai. It was directed by Paul Cox.

With the coming of more immigrants from Asia, cases of leprosy began to appear around the Hawaiian islands in the late 19th century. As it spreads, a colony for the isolation and care of lepers was established on the isolated Kalaupapa peninsula on the northern side of the island of Molokai. The Hawaiian government, with support from the Catholic and other churches sent almost all lepers to the colony. The Catholic Bishop who is in charge of the place feels a need to send some priests there to administer last rites to people shortly before their deaths. Fr. Damien volunteers and is sent to the island with the caution from the Bishop that he shall not touch any of the patients. Fr. Damien is welcomed at the island by Rudolph Meyer, a man who is a Lutheran who takes care of the provisions sent by the government to the island. The Lutheran points to a mountain and tells him that whoever tries to go beyond it is shot dead to prevent the spread of the disease. On his arrival Damien finds that the little chapel in the island has not been properly taken care of and is ruined. He restores the chapel. With God as his sole help, he starts his work at Molokai. A boy who comes to the chapel volunteers to become the altar boy. The boy is the first person Fr. Damien touches. Near to the chapel Father meets a Protestant Englishman turned a patient who was once a medical assistant in Honolulu (a city in another island). He finds it very difficult to adjust with the church but Fr. Damien's presence is some consolation to him. (He later dies and is buried in the Catholic cemetery). The Bishop who is so considerate relates with Damien's provincial that there is a report about the Father, describing him as 'The Christian Hero' by the prime minister.