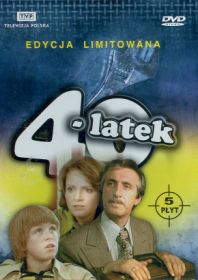 Czterdziestolatek or 40-latek (the English translation: A Forty-Year-Old); broadcast in English by TVP Polonia under the title of "Being Forty" is a Polish television comedy series originally broadcast in Poland between 1975-78. The initial series enjoyed so much popularity that it was continued and led to the release of a feature film I'm a Butterfly, a 40-year-old's Love Affair and a New Year's Eve television program in 1975.