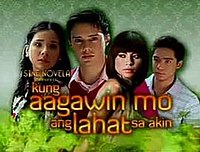 Kung Aagawin Mo ang Lahat sa Akin (International title: When All is Gone / ) is a 2009 Philippine television drama romance series broadcast by GMA Network. Based on a 1987 Philippine film of the same title, the series is the fifteenth instalment of Sine Novela. It premiered on June 22, 2009 on the network's Dramarama sa Hapon line up replacing Dapat Ka Bang Mahalin?. The series concluded on September 25, 2009 with a total of 70 episodes. It was replaced by Tinik sa Dibdib in its timeslot.