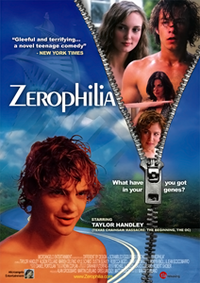 Zerophilia is a 2005 romantic comedy film with speculative-fiction elements directed by Academy of Motion Pictures' Student Academy Award-winning director Martin Curland and produced by Microangelo Entertainment. It is about a young man who discovers that he has a genetic condition which will cause a change of sex following each orgasm. It was filmed in Fall Creek, Oregon.

"Zerophilia" is a fictional condition that affects an unknown number of people with an extra "Z" chromosome. Following their first full sexual experience, zerophiliacs begin to change sex after experiencing an orgasm. Luke (Taylor Handley), a young man somewhat insecure about his masculinity, begins to exhibit zerophilia following an encounter with a woman (Kelly LeBrock). He meets Michelle (Rebecca Mozo) and experiences partial transformations when they go out together.