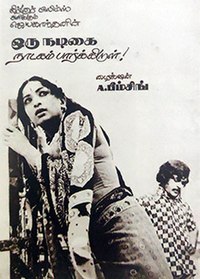 Oru Nadigai Nadagam Parkiral is a 1978 Indian Tamil-language comedy film directed by A. Bhimsingh. Based on the 1971 novel of the same name by Jayakanthan, the film was written by Jayakanthan himself. The film stars Srikanth and Lakshmi, with Y. G. Parthasarathy, Nagesh, Thengai Srinivasan, and Y. G. Mahendran in supporting roles. The film received critical acclaim and was screened at the International Film Festival of India in 1979.