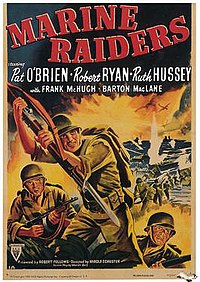 Marine Raiders is a 1944 RKO war film showing a fictional depiction of the 1st Marine Raider Battalion and 1st Marine Parachute Battalion on Guadalcanal, R&R in Australia, retraining in Camp Elliott (where much of the film was made) and a fictional attack in the Solomon Islands. Produced by Robert Fellows, and directed by Harold D. Schuster, it stars Pat O'Brien, Robert Ryan, and Ruth Hussey.

Major Steve Lockhart, commander of a Marine Raider battalion and Captain Dan Craig, commander of the Paramarines are together on Guadalcanal facing a Japanese assault that became the Battle of Edson's Ridge. When Captain Craig discovers the body of one of his lieutenants who had been tortured and executed by the Japanese, he goes on a one-man army kill crazy rampage of revenge in the jungle with his Reising gun (that jams) and his M1911 pistol.