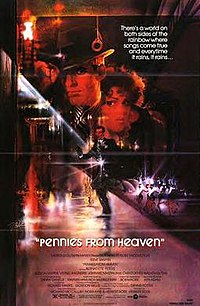 Pennies from Heaven is a 1981 American musical romantic drama film directed by Herbert Ross, based on the 1978 BBC television drama of the same name. Dennis Potter adapted his screenplay from the BBC series for American audiences, changing its setting from London and the Forest of Dean to Depression-era Chicago and rural Illinois.

In 1934, Chicago sheet-music salesman Arthur Parker is having a hard time, both in his business and at home with his wife Joan. His business and marriage are failing, and Joan refuses to give him the money she inherited from her father to start his own business.