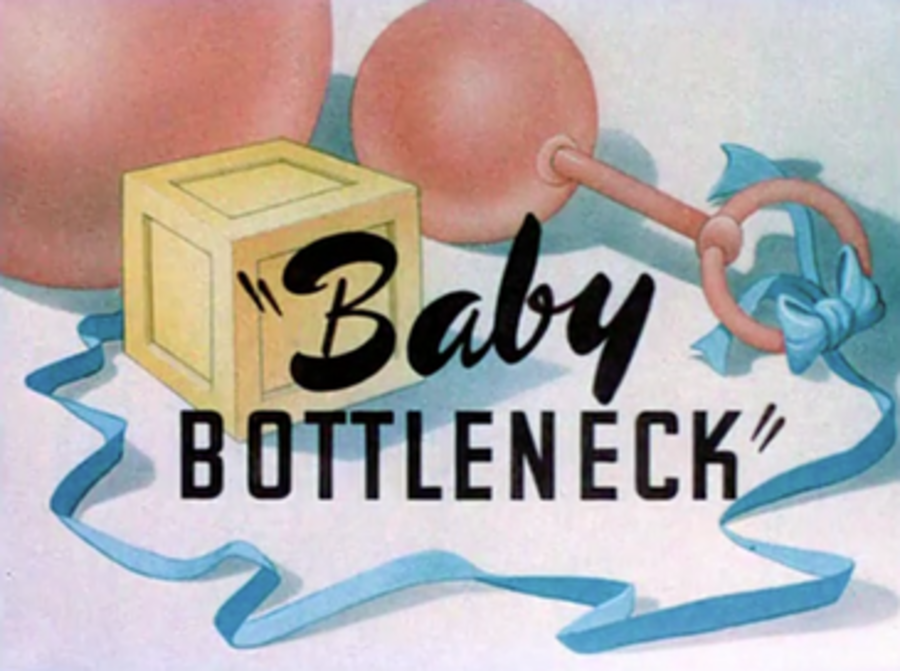 Baby Bottleneck is a 1946 Warner Bros. Looney Tunes cartoon directed by Bob Clampett and written by Warren Foster. The cartoon was released on March 16, 1946, and stars Daffy Duck and Porky Pig.

As the post-World War II baby boom explodes, an overworked stork (patterned after comedian Jimmy Durante) gets drunk in the Stork Club, complaining that he does all the work and the fathers get all the credit. Inexperienced animals; among them a dog with a propeller-powered tail carrying bundles of babies, four crows attempting to deliver an elephant, a pelican with simple devices to help haul the babies in its bill, and a mouse dragging a baby rhino; are among those commissioned to handle the increased workload as they take the babies to their parents. Babies are getting sent to the wrong parents; a mother goose is disgusted by her baby skunk, a baby kitten refuses to swim for its mother duck, a baby gorilla rides uncomfortably in the pouch of a Kangaroo, a Scottie Dog tries to rock his hippo to sleep, and two parents receive offspring that try to eat them—a kitten to a terrified mouse and an alligator to a pig.