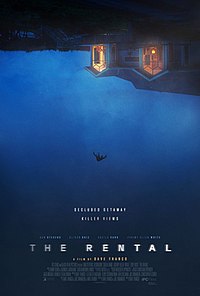 The Rental is a 2020 American horror film co-produced and directed by Dave Franco, in his directorial debut. Franco co-wrote the screenplay with Joe Swanberg, based on a story by Franco, Swanberg, and Mike Demski. It stars Dan Stevens, Alison Brie, Sheila Vand, Jeremy Allen White, and Toby Huss, and follows two couples who begin to suspect they are being watched in the house they rented.

Charlie, his wife Michelle, Charlie's brother Josh, and Josh's girlfriend Mina decide to rent an oceanview house for a weekend getaway. After Mina's application for the house is denied for no reason, Charlie submits one and is accepted. Upon arriving at the remote property, the group meets the property owner Taylor, whom Mina confronts for denying her application believing it was racially motivated. Taylor denies this and leaves, although he does return later that day to drop off a telescope for the group to use, which alarms Mina. The group settles in and it quickly becomes clear that someone is observing the unaware guests.