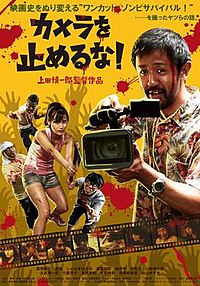 is a 2017 Japanese comedy film written and directed by Shin'ichirō Ueda. It follows a team of actors and filmmakers who are tasked with shooting a zombie film for live television, and who must do so in a single take.

In the first section of the film, the cast and crew of a low-budget zombie film called One Cut of the Dead are shooting at an abandoned water filtration plant. Director Higurashi, desperate for film success due to mounting debts, and frustrated at the actors' work, arranges for a blood pentagram to be painted to activate real zombies per the plant's haunted past. Cameraman Hosoda turns into a zombie and bites assistant director Kasahara, turning him as well. Actress Chinatsu, actor Ko, and makeup artist Nao lock the zombies out of the plant. Higurashi insists they continue filming using the real zombies. Sound engineer Yamago rushes out of the plant and is infected. Higurashi brings zombified Yamago back in for more footage, throwing him at the other humans. Nao decapitates zombified Yamago and is splattered with zombie blood, possibly infecting her.