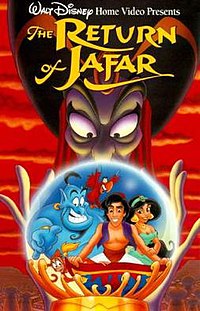 The Return of Jafar (sometimes marketed as Aladdin: The Return of Jafar on re-release) is a 1994 American direct-to-video animated musical fantasy film produced by Walt Disney Pictures and Television. It is the first sequel to the 1992 film Aladdin, and serves as the pilot to the Aladdin animated series (being an origin story of how the series began as it premiered before this film). Released on May 20, 1994 in North America, it was the second Disney animated film sequel after The Rescuers Down Under (1990) and the first Disney direct-to-video animated film, and marked the first American direct-to-video animated film. Gilbert Gottfried, Jonathan Freeman, Scott Weinger, Frank Welker, and Linda Larkin reprise their roles from the first film, with Jason Alexander, Val Bettin, Liz Callaway, and Dan Castellaneta joining in the cast.

One year has passed since the events of the first film. Aladdin and Abu have settled in the palace of Agrabah with Princess Jasmine and her father, the Sultan. Still yearning for adventures, Aladdin foils a criminal group led by the dimwitted Abis Mal and returns their stolen loot to the people of Agrabah. Meanwhile, in the desert, Iago escapes from Jafar's lamp. Tired of being taken for granted, Iago refuses Jafar's demands to free him. After dropping the lamp into a well, Iago returns to Agrabah, hoping to befriend Aladdin and return to the palace. During a confrontation with Aladdin and Abu, the three are attacked by Abis Mal and his henchmen; Iago inadvertently saves Aladdin's life. In gratitude, Aladdin keeps Iago on the palace grounds, promising to speak with the Sultan on Iago's behalf.