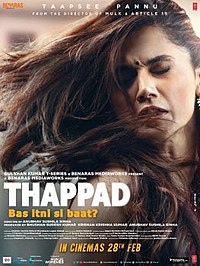 Thappad is a 2020 Indian Hindi-language drama film directed by Anubhav Sinha, which he also co-produced with Bhushan Kumar of T-Series and Vinod Bhanushali. The film, starring Taapsee Pannu, was released in theatres on 28 February 2020.

Amrita Sabharwal and Vikram have been happily married for several years. Amrita is a sparkling woman and a homemaker, who is shown to spend her days looking after Vikram and the house. They throw a party at home to celebrate Vikram's promotion that would have them relocate to London. At the party however, Vikram gets a call informing him that his promotion contract has been compromised for his junior. Angered, he gets into an argument with his superior whom he accuses of two timing him. When Amrita tries to break up the argument, Vikram slaps her in front of everyone. The incident leaves her shaken; she starts to realize all the little unfair things that she had previously ignored and admits to herself that Vikram slapping her isn't what a husband who respects her would do. Moreover, Vikram refuses to take accountability for his actions, stating that he was upset, she got in the way, and things like that happen sometimes (which is wrong).