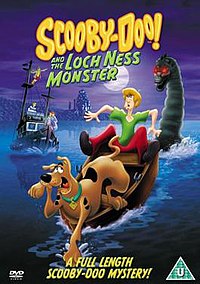 Scooby-Doo! and the Loch Ness Monster 2004

Scooby-Doo! and the Loch Ness Monster is a 2004 direct-to-video animated comedy horror film, and the seventh direct-to-video movie based upon the Scooby-Doo Saturday morning cartoons. It was released on June 22, 2004, and it was produced by Warner Bros. Animation (although Warner Bros. had fully absorbed Hanna-Barbera Cartoons by this time, Hanna-Barbera was still credited as the copyright holder and the movie ended with an H-B logo).

The Mystery, Inc. gang travel to Loch Ness in Scotland to see the famous Blake Castle, the home of Daphne Blake's Scottish ancestors as well as her cousin, Shannon. The castle grounds are home to the first annual Highland games, composed of many traditional Scottish sports. When they arrive, Shannon informs them that the castle has recently been terrorized by the Loch Ness Monster. Shannon says she has seen the monster and it is indeed real, a position shared by Del Chillman, the Loch Ness Monster enthusiast and amateur cryptozoologist, and Professor Fiona Pembrooke, a scientist who has staked her whole career on proving the monster exists. Taking the opposite end of the argument are Colin and Angus Haggart, their father Lachlan, local competitors in the games, and Sir Ian Locksley, the head judge of the games (as well as director of the Scottish natural history museum). Locksley and Pembrooke share a mutual hatred for each other (she was Ian's research assistant at his museum until he fired her for spending too much time on the Loch Ness Monster's trail).