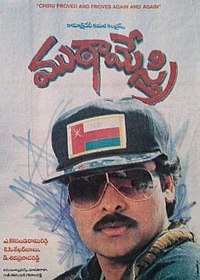 Mutha Mestri is a 1993 Telugu film directed by A. Kodandarami Reddy starring Chiranjeevi, Meena, Roja and Sharat Saxena. The music was composed by Raj-Koti. The film was recorded as Blockbuster at the box office.

Bose (Chiranjeevi) is a very patriotic man who fights for the rights of the local market workers against Aatma (Sharat Saxena), the nearby underworld don. Seeing his dedication for helping the working poor, the Chief Minister (Gummadi Venkateswara Rao) asks him to enter politics. As a politician, he takes charge of a special branch of commandos and destroys Aatma's illegal operations. In retaliation, Aatma has Bose's sister falsely implicated in a prostitution case, after which she commits suicide on the court steps. Bose resigns from his position and takes revenge on Aatma. Finally, he returns to his old life at the market.