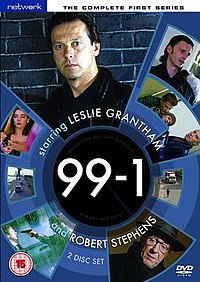 99-1 is a British television crime thriller series, first broadcast on 5 January 1994, that ran for a total of two series on ITV. The series starred Leslie Grantham as Mick Raynor, a maverick undercover policeman tasked with taking down some of the country's most dangerous criminals. The first series co-starred Robert Stephens as Raynor's commander, Oakwood. For the second series, Stephens was replaced by Frances Tomelty as Commander Stone. Other significant roles in the series fell to Adie Allen, Niall Buggy and Danny Webb, with Constantine Gregory also joining the cast in 1995.