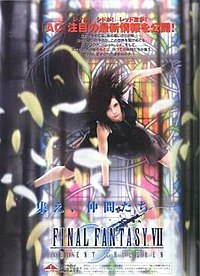 is a 2005 Japanese computer-animated film directed by Tetsuya Nomura, written by Kazushige Nojima, and produced by Yoshinori Kitase and Shinji Hashimoto. Developed by Visual Works and Square Enix, Advent Children is part of the Compilation of Final Fantasy VII series of media, which is based in the world and continuity of the highly successful 1997 role-playing video game Final Fantasy VII. Final Fantasy VII: Advent Children was released on DVD and Universal Media Discs with Japanese voice acting in Japan on September 14, 2005, and on April 25, 2006, with English voice acting in North America and the UK.

Advent Children takes place two years following the events of the 1997 role-playing video game Final Fantasy VII, during which the antagonist Sephiroth attempted to absorb the Lifestream (the lifeblood and soul of the planet) and be reborn as a god. He was defeated by Cloud Strife and his companions. Still, Sephiroth's final spell, Meteor, destroyed the city of Midgar.