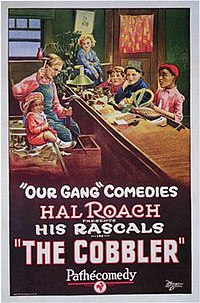 The Cobbler is the eighth Our Gang short subject comedy released. The Our Gang series (later known as "The Little Rascals") was created by Hal Roach in 1922, and continued production until 1944.

After the gang wreaks havoc in the local cobbler's shop, the friendly cobbler takes them on a picnic, during which his old Model T breaks down. While the cobbler goes to the creek to fetch water for the radiator, the gang tries to do all sorts of repairs on the car, causing more problems. Mickey and Jack accidentally disturb the rest of a sleeping hobo, who tries to punish them by doing them serious bodily harm. After their dog chases the hobo off, the gang gets the car going again by rigging it with a sail and they sail off into the sunset.