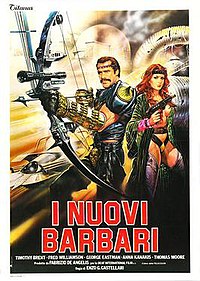 In the year 2019, after a nuclear war, humanity is reduced to a few starving groups. A ruthless gang called "The Templars" constantly raid settlers in an attempt to exterminate everyone in order to purge the Earth. A former Templar, Scorpion, along with his allies, prevents a small band of religious colonists from being massacred by the Templars.