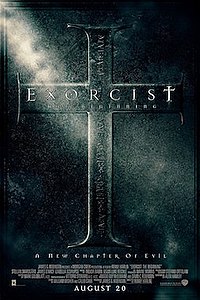 Exorcist: The Beginning is a 2004 American supernatural horror film directed by Renny Harlin. The film serves as a prequel to The Exorcist (1973). It is the fourth installment in The Exorcist series. It stars Stellan Skarsgård, Izabella Scorupco, and James D'Arcy.

A bloodied and terrified priest slowly makes his way across an ancient battlefield full of corpses of soldiers. He reaches the corpse of another priest and tries to take a small demon idol of the head of Pazuzu from his hand, only for the dead priest to briefly come back to life and stop him from taking it. The camera pulls back to reveal that the entire valley is littered with dead soldiers, many of whom have been crucified upside down.