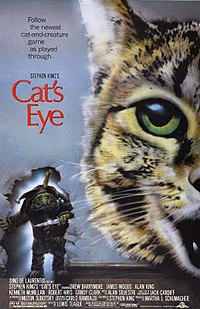 Cat's Eye (also known as Stephen King's Cat's Eye) is a 1985 American anthology horror thriller film directed by Lewis Teague and written by Stephen King. It comprises three stories, "Quitters, Inc.", "The Ledge", and "General". The first two are adaptations of short stories in King's 1978 Night Shift collection, and the third is unique to the film. The three stories are connected only by the presence of a traveling cat, which plays an incidental role in the first two and is a major character of the third.

A stray tabby cat hides from a dog in a delivery truck, which drives to New York City. The tomcat sees the disembodied image of a young girl pleading for help. The tomcat is picked up by a man named Junk.