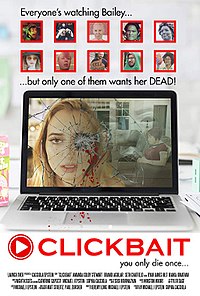 Clickbait is a 2018 social satire horror film directed by Sophia Cacciola and Michael J. Epstein. The film is an exploration of the pressures on people to have performative identities and to seek popularity. The film satirizes not only social media, but the way in which social media is used to sell advertising for mundane products, specifically the invented radioactive toaster pastry, Toot Strudels.

A popular vlogger, Bailey, is upset when she loses her status on vlogging site, str33ker.com, to a competing creator who is diagnosed with cancer. When Bailey starts getting stalked, her popularity rises again, and she is not so eager to have the crime solved. With incompetent police detective Dobson assigned to the case, the culprit will probably not be caught.