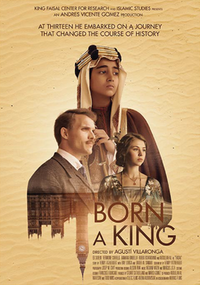 In 1919, following the collapse of the Ottoman Empire, 14-year-old Faisal is sent by his father, Emir Abdulaziz, on a high-stakes diplomatic mission to London to secure the formation of what was to become the Kingdom of Saudi Arabia. Young Faisal negotiates his country's and his family's future with seasoned politicians like Winston Churchill and Lord Curzon, and forms a friendship with Princess Mary.