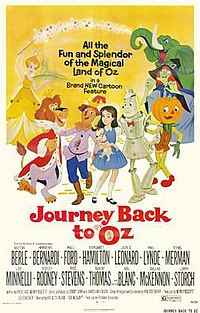 Journey Back To Oz is a 1972 American animated adventure musical fantasy film produced by Filmation. It is loosely based on L. Frank Baum's second Oz novel, The Marvelous Land of Oz (1904), although Baum received no screen credit.

After a tornado in Kansas causes a loose gate to knock Dorothy unconscious, she re-appears in the Land of Oz with Toto, and encounters a talking Signpost (voiced by Jack E. Leonard), whose three signs point in different directions, all marked "Emerald City". They later meet Pumpkinhead (voiced by Paul Lynde), the unwilling servant of antagonist Mombi – cousin of the deceased Wicked Witches of the East and West. Toto chases a cat to a small cottage where Dorothy is captured by Mombi's pet crow (voiced by Mel Blanc) and Mombi (voiced by Ethel Merman) herself. Pumpkinhead sneaks into the house in Mombi's absence, and discovers her creation of green elephants, to use as her army to conquer the Emerald City. Pumpkinhead frees Dorothy, and they flee. After finding Dorothy gone, Mombi threatens that their warning the Scarecrow will not help when her green elephants "come crashing through the gate".