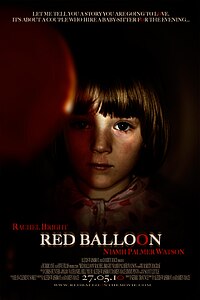 Red Balloon is a 13-minute thriller short film directed by Alexis Wajsbrot and Damien Mace. It is adapted from the "clown statue" urban legend.

A young teenage girl named Julie is babysitting a younger child named Dorothy whilst the parents are out by themselves. Dorothy interrupts Julie's phone conversation with her friend, telling her she needs more money and so is babysitting. After hearing the child yell, she comes up to her bedroom and reassures her she has just had a nightmare. In the child's room, a pile of dolls and teddy bears are clearly noticed, including a large patchwork rabbit. Throughout the night, the teenager flicks through random TV channels and paints her nails, obviously bored with her job. A news report is informing viewers of a criminal breaking out of a mental institute, but she ignores the show and nearly falls asleep. She wakes to apparently see a red balloon and too Dorothy next to the sofa, looking terrifying, but realises she has just woken up. Another scream is heard from Dorothy's room, who is now standing up in her bed, pointing at the rabbit from the pile of toys. Julie impatiently tucks her back into bed and tells her she has nothing to be scared of, it is just a doll. Once in the landing, she phones a woman, supposedly Dorothy's mother, to ask whether the girl has had any trouble sleeping before and to question her on why she is so anxious of her toy rabbit. The mother has no idea what she is talking about because Dorothy has never had a large toy rabbit of which Julie has just described. A horrified Julie gasps and struggles to speak, her eyes flickering upstairs as the rabbit in the bedroom shuffles the other smaller toys off. The eyes snap open and it is shown that the "toy" is in fact a human intruder.