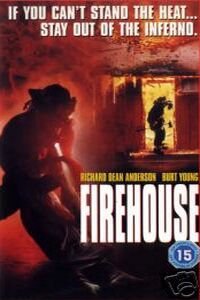 Firehouse is a 1997 dramatic television film about a firehouse crew who are dealing with fact that the firehouse is being consolidated with an EMS unit, and with a sniper who keeps shooting at them at fire locations.

Chief Shea keeps dreaming about an accident that put one of his firefighters, Eddie McCarthy, in the burn ward. Lt. Michael Brooks is struggling with his divorce and Andre's girlfriend leaves him because she fears losing him every time he leaves to fight a fire. The firehouse is consolidated with the EMS unit and must remove their barbecue to make room for the ambulance as well as allow EMS rescue worker Kate Wilkinson to sleep in their firehouse. Chief Frank Shea and many of the other firefighters are not pleased about the situation and are unsociable.