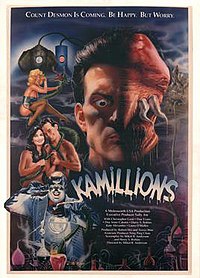 Kamillions is a 1989 film directed by Mikel B. Anderson from a story by Robert Hsi and a screenplay Anderson wrote in collaboration with Harry S. Robins. The film was re-edited by producer Teresa Woo, who later admitted she did not really understand an English language science fiction comedy, and was expecting more of an action film. The film was shot primarily in the Dunsmuir House and Gardens in Oakland, California.

Robins plays bumbling mad scientist Nathaniel Pickman Wingate, of the Miskatonic University. He works on opening a portal to another dimension while his wife, Nancy (Laura O'Malley) and family prepare his fiftieth birthday party. When he succeeds with contact with the new dimension, two triops-like creatures escape. These creatures possess shape-shifting abilities that allows them to assume the form and identity of anything, and thusly do so with Nancy's cousin, Count Desmon (Christopher Gasti) of Liechtenstein and Jasmine, a model from son Sam's (Dan Evans) poster (Dru-Anne Cakmis).