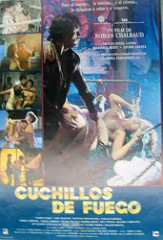 Cuchillos de fuego is a Venezuelan film released in 1989. It was directed by Román Chalbaud based on his theatre play Todo bicho de uña, where a young man, David, seeks revenge on his mother's rapist and murderer. In the film, which is styled like a Western, a stop-motion animated children's drawing of the young David crying over his mother's body is used to tell parts of the story. After searching through the Andes for ten years, he kills several Apaches for his revenge.