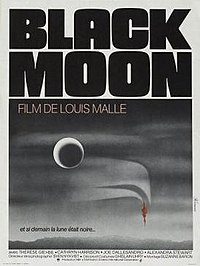 Black Moon is a 1975 experimental fantasy horror film directed by Louis Malle and starring Cathryn Harrison, Joe Dallesandro, Therese Giehse, and Alexandra Stewart. It was shown at the 1975 New York Film Festival, it was distributed in the United States by 20th Century Fox. It was filmed in France but film's dialogue is in English. The film is dedicated to Therese Giehse, who plays the character of the Old Lady. She died shortly following shooting.

A young woman seeks refuge from a civil war between the genders in a rural château, where she is taken in by a bizarre family and encounters numerous dreamlike scenarios.