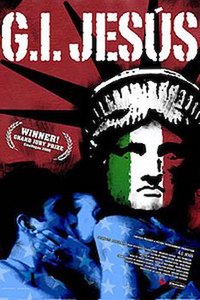 G.I. Jesús (alternatively, G.I. Jesus) is a 2006 American film directed by Carl Colpaert. The film follows Jesús, a Mexican national seeking US citizenship through military service, who returns home to Los Angeles on furlough from the Iraq War. It won the grand jury prize at the 2006 CineVegas Film Festival.

Jesús is a Mexican national who joins the United States Marine Corps to receive naturalization in the United States. After a traumatic incident during service in the Iraq War, he returns home on furlough to spend time with his wife and daughter in Los Angeles. As he attempts to reconcile his traumatic past with his home life, he begins to see visions of a man named Mohammed, who confronts Jesús over a father and daughter that Jesús accidentally killed in Iraq. Jesús increasingly has trouble distinguishing fantasy from reality, and visits a doctor who offers apparently paranoid theories about pharmaceutical experimentation on soldiers. Jesús is then ordered back to Iraq, increasing the strain on his family life. He considers returning to life in Mexico.