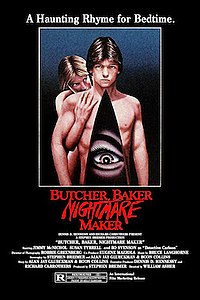 Butcher, Baker, Nightmare Maker, later released as Night Warning, is a 1981 American exploitation horror film directed by William Asher, and starring Susan Tyrrell, Jimmy McNichol, Julia Duffy, and Bo Svenson. Framed as a contemporary Oedipus tale, the plot focuses on a teenager who, raised by his neurotic aunt, finds himself at the center of a murder investigation after she stabs a man to death in their house. The boy's sexually repressed aunt secretly harbors incestuous feelings for him, while a homophobic detective investigating the crime irrationally believes the murder to be a result of a homosexual love triangle.

High school senior Billy Lynch lives with his protective aunt Cheryl, who has raised him since infancy after his parents died in a car accident. A gifted basketball player, Billy is offered a chance at a scholarship to attend the University of Denver, but Cheryl dismisses the idea, assuming that Billy will stay with her to "contribute." At school, Billy is bullied by one of his basketball teammates, Eddie, who is jealous of Billy's close camaraderie with their coach, Tom Landers; meanwhile Julia, the school newspaper photographer, begins to take romantic interest in Billy.