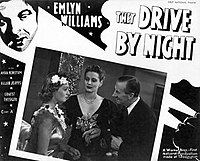 They Drive by Night is a 1938 British black-and-white crime thriller film directed by Arthur B. Woods and starring Emlyn Williams as Shorty, an ex-con, and Ernest Thesiger as Walter Hoover, an ex-schoolmaster. It was produced by Warner Bros. - First National Productions and based on the novel They Drive by Night by James Curtis.

"Shorty" Matthews (Emlyn Williams) having recently been released from prison visits his girlfriend in London only to discover she has been murdered. Fearing he will be wrongly accused of being the culprit he disappears amongst the long-distance lorry driving community.