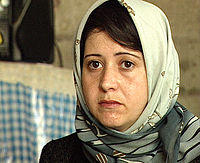 Close, Closed, Closure (סגר) is a documentary film by Ram Loevy that aired on Israel's Channel 8 on 5 August 2002. The film describes life in the occupied Gaza Strip, three years before Israel unilaterally disengaged from there in 2005. The film employed both Israeli and Palestinian film crews to tell the story behind the intense frustrations of the local population, which erupted in the Second Intifada and the 2008-2009 Gaza War. At the same time, it also presents the attitudes of two conflicting groups in Israel: the rightwing settlers, who express their contempt for the local population; and the leftwing peace camp that demanded an Israeli withdrawal. The title derives from the frequent closures of Gaza by the Israeli government—during the filming, the border between Israel and Gaza was closed, opened, and closed again.