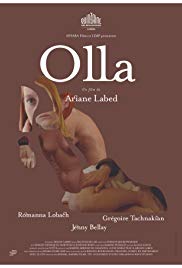 Olla is a 2019 drama film, written and directed by Ariane Labed, starring Romanna Lobach, and Grégoire Tachnakian. It follows Olla, a woman from eastern Europe, who responds to an advertisement on a dating site. She moves in with Pierre, who lives with his old mother in a suburb in France.