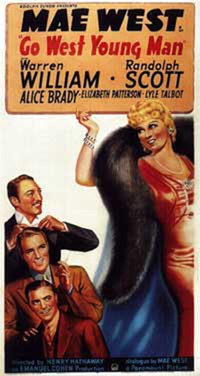 Go West, Young Man is a 1936 American comedy film directed by Henry Hathaway and starring Mae West, Warren William, and Randolph Scott. Released by Paramount Pictures and based on the 1934 play Personal Appearance by Lawrence Riley, the film is about a movie star who gets stranded out in the country and trifles with a young man's affections. The phrase "Go West, Young Man" is often attributed to New York Tribune founder Horace Greeley, and often misattributed to Indiana journalist John B. L. Soule, but the latest research shows it to be a paraphrase.

Mavis Arden (Mae West), is a movie star who gets romantically involved with a politician. She makes plans to meet him at her next tour stop but her Rolls Royce breaks down and she is left stranded in the middle of a rural town. Her manager arranges for her to stay at a local boarding house. She immediately set her eyes on the young mechanic, fixing her car, Bud Norton, played by Randolph Scott. West sings the Arthur Johnston/John Burke song, I Was Saying to the Moon as she is trying to seduce Scott.