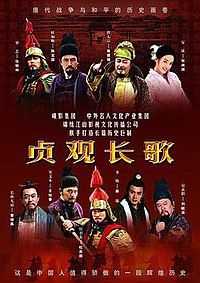 Carol of Zhenguan is a Chinese historical television series directed by Wu Ziniu. It was first aired on CCTV-1 in China in 2007. The series is based on the events in the Zhenguan era of the reign of Emperor Taizong during the Tang dynasty.

In 626, during the Tang dynasty, Li Shimin assassinated two of his brothers, Li Jiancheng and Li Yuanji, at the Incident at Xuanwu Gate. Two months later, he ascended the throne as Emperor Taizong, and named his era of reign "Zhenguan". Taizong had to deal with external threats from the aggressive Tujue in the north and bring peace and prosperity to his empire. Under Taizong's rule, China flourished in various aspects and the Zhenguan era is considered one of the golden ages in Chinese history.