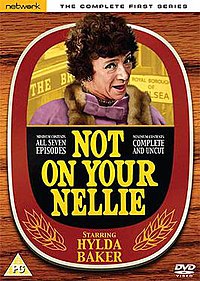 Not On Your Nellie is a British sitcom that ran from 1974 until 1975. It starred veteran actress Hylda Baker as Nellie Pickersgill, a Bolton woman who moves to London to help run her ailing father's Chelsea pub. Seventeen episodes of the series were produced by London Weekend Television for the ITV network.

When Jed Pickersgill (John Barrett) finds himself too ill to run his Chelsea pub, The Brown Cow, he calls upon his middle-aged daughter Nellie for help. Nellie, however, is teetotal and does not approve of alcohol (or any vice) and attempts to maintain order in the pub by keeping a watchful eye on the regulars and her wayward father. Regular customers included Charlie (Leo Dolan), a window cleaner whose pastimes included booze and women; Ali (Azad Ali), an Asian London Underground worker who was forever being assaulted in the line of duty; George (David Raynor), an effeminate gay man who runs a nearby fashion boutique; and Gilbert (Roger Howlett), his flamboyantly dressed but always silent boyfriend. There was a new busty barmaid in each series (each disapproved of by Nellie), including Beryl (Alexandra Dane), Doris (Wendy Richard), and "Big Brenda" (Sue Nicholls).