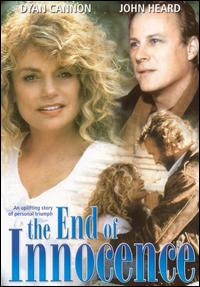 The End of Innocence is a 1990 semi-autobiographical film starring, written and directed by Dyan Cannon.

Unwanted and ignored by her eternally squabbling parents, a young girl is spiritually torn apart by forces beyond her control. Her parents do further damage to her battered psyche by giving her mixed messages concerning sex and religion. However, her self-esteem dwindles to microscopic proportions on account of a series of worthless boyfriends. After suffering a nervous breakdown, she is placed in an asylum, where she is treated for the first time as a human being rather than a nuisance by a compassionate psychiatrist.