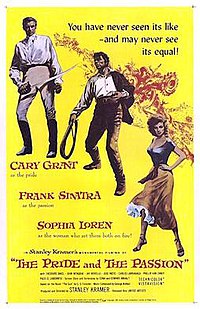 The Pride and the Passion 1957

The Pride and the Passion is a 1957 Napoleonic-era war film in Technicolor and VistaVision from United Artists, produced and directed by Stanley Kramer and starring Cary Grant, Frank Sinatra and Sophia Loren. The film co-stars Theodore Bikel and Jay Novello.

During the Peninsular War, Napoleon's armies overrun Spain. An enormous siege cannon, belonging to the Spanish army, is abandoned when it slows down the army's retreat. French cavalrymen are dispatched to find it.